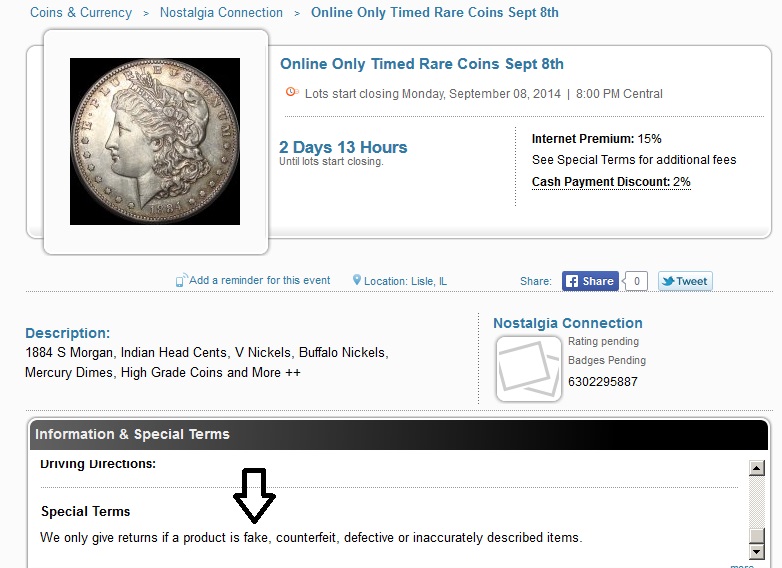 Nostalgia Connection, new to the portal, is off to a great start because its policies are aligned with Proxibid’s Unified User Agreement concerning counterfeit, doctored or misrepresented items.

Unlike many other Proxibid houses that maintain, often in all caps–ALL SALES FINAL; NO RETURNS!–Nostalgia Connection reiterates the Unified User Agreement in one concise sentence:

We only give returns if a product is fake, counterfeit, defective or inaccurately described.

If, within a reasonable amount of time, Buyer gives notice in writing to Seller that the lot so sold is a counterfeit and after such notice the Buyer returns the lot to Seller in the same condition as when sold, and establishes to the satisfaction of Seller that the returned lot is in fact a counterfeit, Seller as agent for the consignor will rescind the sale and refund the purchase price.

We encourage all Proxibid auctioneers to read 6.3 of the Agreement, to which they are bound, which covers disputes concerning when lots are significantly not as described.

If your attorney has encouraged you to put in your service terms, “ALL SALES FINAL!,” you should encourage him or her to read the US Hobby Protection Act and US Federal Code: Chapter 25: Counterfeiting and Forgery (Sections 485-492).

Violate the Hobby Act, inform your attorney, and you can be reported to the Federal Trade Commission. Sell counterfeit coins or currency, and you will be dealing with the Secret Service. We like to remind Proxibid and its clients that national experts on counterfeiting are located right there in the Secret Service Office in Omaha, where Proxibid is located, at 2707 N 108th St.

Here’s some good news, though, for auctioneers. You don’t have to be entirely liable for fake, defective or counterfeit lots. You just have to create a contract with your consignor, as some of our best houses do, stating that all non-genuine and/or defective lots will be returned to the seller with any payment due to the auction company.

2 thoughts on “Kudos to another house that read the Unified User Agreement; your lawyer should, too”