We were excited when Proxibid unveiled its “Report this Item” function. We’re more excited to see that the portal followed through on one of our reports of fake California fractional gold.

Among the most faked coins are California fractional gold. Almost all being offered on Proxibid, eBay and other portals are base-metal replicas manufactured in the 20th century. Typically, they feature a bear on the reverse with “1/4” or “1/2” or “One”–eliminating the monetary denomination 25 cents, 50 cents, half dollar, dollar and so forth.

Below are examples of real California fractional gold, compliments of NGC, which also has posted an article about the kinds of coins it holders. 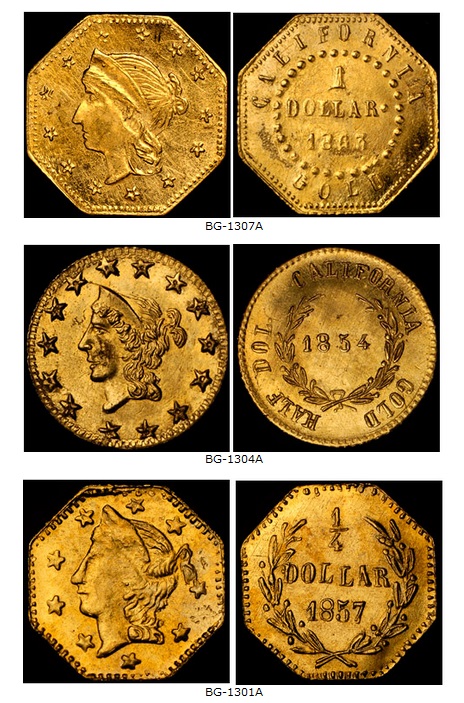 Proxiblog has run several articles about California fractional gold. One of our posts is logging more than 100 views per week.

This post challenges Proxibidders to use the “Report this Item” button whenever you discern a fake or replica example of California fractional gold.

Why are we taking such a stand? Because real fractional gold sells for hundreds and sometimes thousands of dollars, and we have seen certain bidders (ones that try buy all lots marked “gold” in any Proxibid coin auction) paying exorbitant fees for near worthless brass and/or gold-dipped brass plate.

Beware the bear on the reverse. Learn about the hobby. Bid with confidence when you are confident about your knowledge of numismatics.