In our Feb. 26 post this year, we asked that Proxibid add an interactive function to the “My Lots” feature, so that bidders did not have to go through multiple clicks to rebid an item … and then return to the MyProxibid window. We were happy to see that function now exists.

Earlier we wrote, “Bidders who place dozens if not hundreds of bids each month on Proxibid eventually do not increase their maximums because of the keyboard tedium of Proxibid’s ‘My Lots’ programming, especially complicated for smart phone users.” We made the point that Proxibid and auctioneers want bidders to spend more time placing maximums on lots and less time dealing with multiple mouse clicks for functions that should be available technologically.

Now that has been programmed.

Look at the top photo. This is what one sees in the “My Lots” window. If in the above case lot 155 is clicked, a new window opens automatically. (Click and expand photo below.) 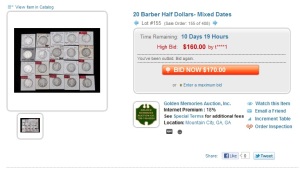 Every seemingly little tech enhancement goes a long way to attracting and keeping customers on the portal.