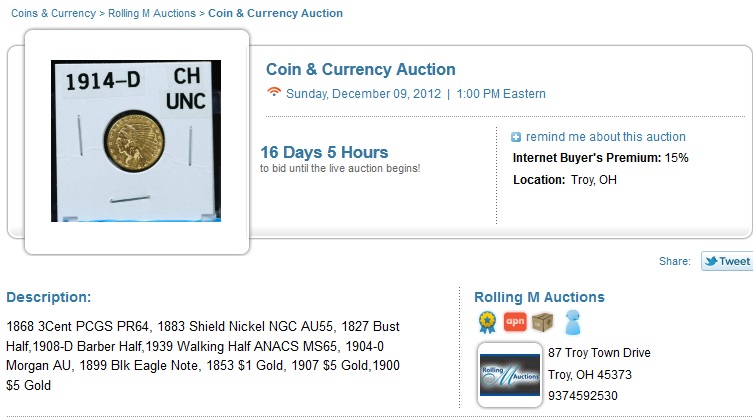 We will run occasional grading checks on Proxibid auctions so you can see how we bid based on condition. These coins are from Rolling M Auction’s Dec. 9 auction. We grade on PCGS standards as found on Photograde, admittedly more conservative than grading of most auctioneers but still the standard in numismatics. Click pictures below to expand.

We call a coin: 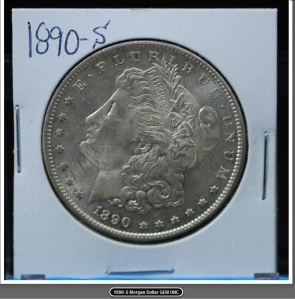 “Gem Uncirculated” if will grade at NGC or PCGS at the MS65 or higher level. We disagree with this grade. We see noise on the cheek and a potential rub under Lady Liberty’s cheek. We put this at best MS63-64 or MS63+.

“Choice Almost Uncirculated” if it will grade at NGC or PCGS at the AU58. Rolling M calls this almost uncirculated. We disagree and believe it is mint state, possible MS62.

“Almost Uncirculated” if it will grade at PCGS MS50-58. We agree with this grade and believe it is conservative. Other auctioneers would have called this mint state.

“Deep Mirror” if the luster can capture text or an image at least 6 inches away from the coin, and prooflike if it can do the same from 2-4 inches. We just cannot tell from this photo. We will bid on this coin on condition rather than on deep mirror because the photo doesn’t show a mirror at all. We also suspect this is a rare 1880/79-S because we think we see a part of the “7” in the second “8” of 1880. Again, the photo almost but does not exactly pick this up. 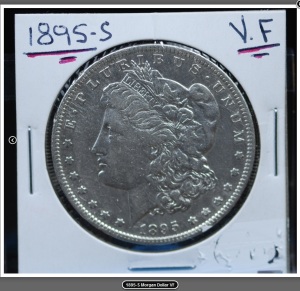 “Very Fine” if it will grade VF30-35. We agree with this grade numerically but see rim damage on the “L” and “U” of “Pluribus” in addition to faint scratches or hairlines in that area of the motto. We would label this “Very Fine Details.” 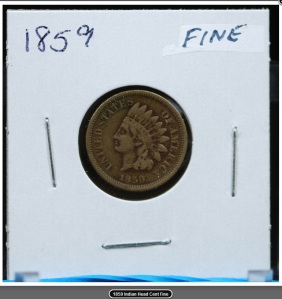 “Very Good” if the coin would grade VG8-10. We agree with the grade. 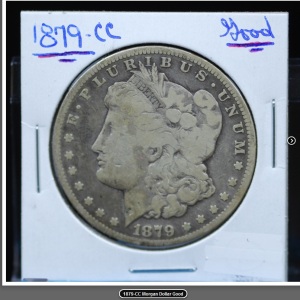 “Good” if the coin will grade G4-6. We agree with this grade.

“About Good” if the coin will grade G3. We agree with this grade.

Generally, in our subjective but nonetheless expert opinion, we feel Rolling M Auctions always has a good selection of coins across the grades and does an increasingly fair job at photographing and describing them. We agree with most of the grades, and that is rare in a Proxibid auction. Also, on occasion, Rolling M misses flaws in coins. But it also catches them, too–and that’s saying a lot for the auctioneer. We think a bit more time should be devoted to analyzing the coins for condition. We have bid regularly with Rolling M since its appearance on Proxibid. We know the auctioneer seeks continuous improvement. We encourage the house to go one more step in providing that improvement via descriptions and sharper photography.

As noted, grading is in part subjective, and is difficult to do via online photographs. Our designations are based on how we bid and why. Thus, the overall grade on Rolling M grading based on our criteria: B+.